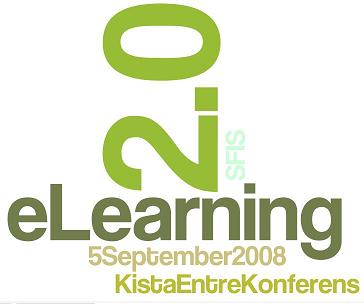 Just a quick reminder: We’ll be live streaming the eLearning 2.0 Conference on Friday September 5 from Stockholm into the Second House of Sweden auditorium. The sessions start at 9am and will finish around 6pm, Stockholm time (midnight to 9am, Second Life time).

eLearning 2.0 is being organized by the Swedish Association for Information Specialists (SFIS) and will be conducted in English.

I’ll be moderating in Second Life, if the need arises, making sure that participants in Second Life can take part by asking questions to the real-life moderator. It will be a laid-back affair, and take place all day long, so drop in and take a look or spend a longer time on those sessions you’re interested in. Alas, the only food and drinks you’ll get during breaks at the Second House of Sweden will be virtual:-)

To paraphrase a famous New Yorker cartoon, In Second Life, nobody knows you’re Newt Gingrich. Apparently, he’s visited the Second House of Sweden, and namedrops the virtual embassy as an inspiration for a stronger US push into virtual worlds:

Second Life is a more sophisticated extranet, representing the next wave of collaboration using a 3D Internet virtual world. It is so compelling that people actually spend real money to buy real estate in this online reality. The Swedish government actually has an embassy in Second Life.

Newt may not have invented the internet, but he’s certainly pushing the 3D web:-) (Via The Escapist, which adds a nice take on the news)

Posted on September 4, 2007 by Stefan Geens | Leave a comment

Another Swedish univertsity is venturing into Second Life. Umeå University’s HUMlab, “a vibrant and diverse meeting place for the humanities, culture and information technology”, has just bought part of a sim and is beginning to explore the space. The HUMlab Blog is documenting progress — you can read more about it here and here.

Looks like Estonia will soon be joining Sweden in getting a virtual embassy on its own dedicated sim.

The Stockholm School of Economics held a seminar on Second Life on June 14. PDFs of the presentations are now online here. (They’re in English even if the page linking to them is not.)

Machinima in the service of political cartooning

Now here is an example of machinima where I can see the point: In the service of political cartooning. (Via Andrew Sullivan)

LONDON (AP) – The Church of England accused Sony Corp. (SNE) on Saturday of using an English cathedral as the backdrop to a violent computer game and said it should be withdrawn from shop shelves.

The church said Sony did not ask for permission to use Manchester cathedral and demanded an apology.

The popular new PlayStation 3 game, “Resistance: Fall of Man,” shows a virtual shootout between rival gunmen with hundreds of people killed inside the cathedral. Church officials described Sony’s alleged use of the building as “sick” and sacrilegious.

This raises some interesting intellectual property issues. We certainly asked for (and got) permission to use the architectural plans for House of Sweden to build Second House of Sweden. We also got permission to build IKEA and TMF furniture, and we got permission to show the documents in Raoul Wallenberg’s office, the photos taken for the Sweden in 60 Images exhibit and the paintings from Nationalmuseum. In some cases, with the permission came help that made the job a lot easier, and opportunities for both sides to publicize the collaboration. But at the foundation, did we need to ask for this permission?

I tink the answer is “It depends”: If text or imagery is copyrighted, then it is clear that permission is needed. But does that requirement extend to buildings? None of the big players in real-world virtualization stakes — Google and Microsoft, notably — are asking for permission to recreate buildings from the real world in their virtual globes. Some of those buildings are already highly detailed, and will certainly become even more life-like. Crucially, both Google and Microsoft make money from their virtual globes and the buildings on them — just like Sony with the buildings in the virtual worlds of its first-person shooters.

When it comes to furniture, I think the issue is less clear. Would it be okay for Sony’s game to feature IKEA bookcases in the cathedral, especially if they are used in the game as objects to hide behind in a firefight? My hunch is yes — if you wanted to make a movie with IKEA furniture in it, all you’d have to do is buy it. You don’t first need permission to show it, no matter how much blood and gore gets spilled.

As for the Church of England’s cathedral and Sony, I think Sony is in the clear. If it is okay to virtualize signature buildings without the permission of the owners or designers, then it has to be okay in all cases — and not depend on whether you approve of the use to which the building is put.

The three colleges will build virtual buildings and virtual classroom spaces on these islands. The partners will also develop a variety of activities that support different segments of their real life student populations as well as allow for cross communication between the student bodies.

The combined space wil consist of two sims (“islands”) called the Kamimo Islands. You can read more about the project here.

Update: Of course there is a blog, Kamimo Islands.

Three interesting events have happened in the Second Life arena over the past few weeks, and together they make a compelling case that the place is growing up, but not without growing pains:

Before I draw some general conclusions, there are some interesting reactions to the introduction of search in SL worth noting: SL blogs in the main have lauded it, as do I. It greatly increases the findability of SL objects, and hence the usability of SL as a whole. It truly does to SL what the advent of decent search engines did to the web in 1996.

But on the web in 1996, it also took some getting used to the fact that search engines made holiday snapshots or a CV on your obscure home page accessible to all. To others, this newfound search efficiency cut out profit opportunities for business plans that relied on information opacity. And so it is in SL today: Large SL stakeholder Anche Chung has forbidden the bot from all her properties, and residents are realizing they have public objects listed for sale that they thought were out of the public eye, simply because there was no easy way to find them previously.

There are some larger trends afoot, I think: The coming ability to verify identities will make it easier for businesses (including casinos) to be run legitimately in SL, just as they are on the web now; this is just another step in the process of SL becoming a mainstream 3D medium — a 3D immersive web rather than a self-sufficient alternate community.

The introduction of search also sees Linden Lab Electric Sheep take on a relationship to Second Life which is not unlike that of Google to the web.

What about a Google analogy for Linden Lab? It is to Second Life what Google is to the Google Earth Community and YouTube. Both these places contain user-generated content, but Google also hosts the content, and thus has an ultimate legal responsibility — witness recent dustups in Turkey and Thailand over YouTube content deemed illegal in these countries. Gambling in Second Life present a similar exposure for Linden Lab.

The long-term solution to such dilemmas is to open-source the software that serves Second Life content, or at the very least to license it — and this will be easier to do once protocols are in place for proving one’s true identity. In other words, everything is proceeding according to plan in the metaverse roadmap:-)

Second Life and the web blur… and this is a good thing.

A week ago, there was no web presence for Swedish Second Life projects by organizations. Now there are two (in addition to this here blog):

Natalie Moody/Therese Åhs, a Swedish in-world live music performer, also has a website up, where she posts her schedule and writes about herself.

A couple of conclusions:

The barriers between the web and Second Life are blurring. Not only is it getting easier to access media files already published to the web inside Second Life (Quicktime video, images, news feeds), there is a flurry of new services that are providing web 2.0-like social services, like social bookmarking and web/SL instant messaging.

It’s a good thing that these barriers are blurring. The web and the metaverse/Second Life have different strengths. The web is by far the most efficient means of disseminating textual information and documents, or accessing calendars and mail. The metaverse provides a far richer and more intuitive means of live communication, both between individuals and groups. As 3D virtual worlds go mainstream, I suspect we’ll see a division of labor: We’ll simply choose the tools that do the job most effectively. This means, for example, using a blog to alert people of social events in Second Life — and it makes sense, because we are not in Second Life all the time (at least most of us arent:-)

I think there is one likely source of friction in all this: some of Second Life’s early adopters, the true believers in the metaverse, are romantics, and are wishing for an independent metaverse, where the rules (and identities) of the real world don’t apply. All this blurring is going to be a challenge when new adopters of Second Life, who see the virtual worlds mainly as a pedagogical and communications tool, will demand real, verifiable idenitities from the people they interact with. It’s mighty hard to know who to trust in Second Life right now, not without getting real-life assurances as to whom you are dealing with. I think that in the future it will be difficult to be anonymous in Second Life if you also want to interact with real-world organizations and their presences in SL.